Yesterday The T hosted a College-style squash match. 2 Teams, 9 players each, arranged in order of skill level from 1-9. Each match counts the same amount toward the team total, first team to 5 wins. Our teams were Harvard vs Cornell, corresponding to the collegiate teams where The T’s two coaches played as college squash players.

It was a great event, with Cornell earning a hard-fought 6-3 victory. There was one beautiful moment that I want to share. After the match, one of our budding 8 year old squash players came up to me and said “Where do you think I should go to college? I want to go somewhere where I can play squash!”

This may seem a typical child-like aspiration (like I want to be a fireman). But I believe it is more than that. In fact, it is exactly the kind of aspiration we try to ignite in children. This is an aspiration born of hard work – this 8 year has already been playing squash for 2 years – and realism – he already knows a little about college squash. Both his coaches played college squash, he understands that a college squash player is a student and an athlete, he has already played in two college-style squash matches at The T and he has already traveled to 2 national level tournaments (and was thumped). There is some realism to what this boy is aspiring to. He is consciously setting his mind and will in the direction of a lofty goal that has attracted him. He wants to be part of a group of individuals (college squash student / athletes) that he admires.

We think this is great. We believe that when we give children a healthy target to focus their aspirations we are igniting a fuel tank of motivation and desire that will propel them toward learning and progress. The ignition of this inner engine is the vital work of early childhood learning. It is the beginning of a multi-year process and something we celebrate when we see it.

On Saturday September 27th as part of our “Squash and Symphony” open house, Coaches and students at The T Squash Academy will duel in a college-style squash match.

Teams are named after the schools where our Coaches played college squash (Coach Neal at Harvard and Coach Laura at Cornell). The first team to record 5 total team wins is the victor, but all 9 matches will still be played.

How does a match work?

Any players not participating in the “Symphony” recitals should plan to arrive at 2:45 pm and remain until 4:30 pm.

Here are the Teams! 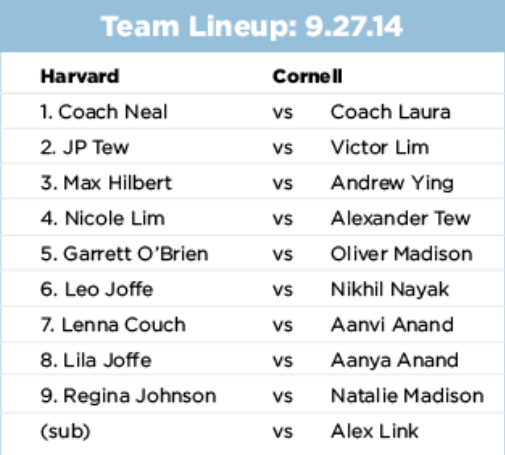 The power of practice.

Saw Federer in a practice session today at the ATP. Amazing to see him working up close. Watching him practice was as impressive as any of the matches we watched. You got the sense that a great player is built in practice whereas matches are only where they are revealed.

Was struck by his dedication to practice. The man is 33 yrs old, has won 17 Grand Slam Titles and here he was on a hot afternoon in a practice session before his 7:30 match in Cincinnati. Maintaining mastery of the simple stuff. Grooving his forehand, backhand, volleys and overheads. Also struck by his mental focus and positive mindset. He looked more focused in a ‘meaningless’ practice session than Djokovic looked in his second Round match (a loss to Tommy Robredo). Fed calmly went about his business and rolled right through any mistakes he made, just moving on and hitting the next ball better. It was a great lesson in how to practice, a demonstration of how excellence in practice produces excellence.

What is the point of a junior squash tournament?

In a city where squash is still barely known, the best way to explain something is to just do it. But for those who have not been to one of our tournament, here’s a first pass at why we host them.

Squash is a very hard sport to learn. It requires a great deal of individual commitment, because ultimately you are the only one you can rely on during the match itself. There is no hiding behind teammates when it comes to match-time. You must learn every stroke, you must learn how to move efficiently in the court, you must learn how to respond to every situation you are faced with in the rallies.

It is a tall order to learn these things, especially for a young child. The fact is, children really can’t appreciate the urgency of the learning challenge until a tournament match reveals it. Thus the tournament becomes a teaching aid. A child who runs up against a tough opponent with a good serve or great court positioning will suddenly understand why it is important to work on these things and how to defend against them.

Children also gain a sense of camaraderie from tournament play, especially when parents and coaches are constantly reinforcing the progress of each child, not just those who win. Kids come to see that they are engaged in a learning process with their peers and that makes it more fun. That drives the learning process.

A child’s powers of concentration are also tested and strengthened in tournament play. Squash is a 1 on 1 sport, played in a glass box, with spectators watching and the score announced at each point. It requires great mental focus for a child to stay on task in this environment, especially when the going gets tough. Thus tournament play is an aid in develop calm and strong critical thinking skills as well as emotional maturity.

Lastly, tournaments can dramatize and reinforce the importance of character and values. A squash match presents a child with a running string of options that can build up a child’s character and core sense of values. There are moments when a child can choose to be honest or to try to get away with a call the ref did not see; to be brave and fight on, or to wilt and give up the effort; to get angry or to hold one’s emotions in check; to compliment one’s opponent or to seethe on the inside; to stay at the matches to encourage one’s teammates, or to leave the courts early because all you care about is your own match. These are just a few of the choices that are presented to a child in a tournament match. In our program we encourage our children to make the choices that will build them up as young people.

Through the sport of squash, we strive to build life and leadership skills in children from across the city. And tournament play is one of important ways we do this. As our model matures, we will strive to host a junior tournament every other month. We hope to see you in the stands and your children on the courts.