T Coach and dad Neal Tew shared some thoughts about being a squash parent.
I’ve been thinking lately about the nature of competition and the role it can play in the development of a child’s personality. It is easy to think competition is something to be avoided — too rough, too likely to end up creating harm or hurt feelings, too much pitting one child against another. I think these ideas miss the point. The root of the word competition — from the Latin, com + petere — denotes a basic meaning of “to strive together.” This echoes with the experience I have seen our children go through at The T.

If you go to the heart of competition you will find, I believe, an opportunity for a child to strive with others, to better themselves with others, to test themselves alongside other co-strivers. That is what a competitor can be: a co-striver. In squash, no child advances quite so far as they do when they have a co-striver practicing alongside them or squaring off against them in regular matchplay, be it leagues or tournaments. The co-striver is like a metric against which personal progress can be measured, a bar that shows how high one needs to jump, a wave that crests and waits to be ridden, even if it knocks one off the board. In this sense, competition is not a fundamentally negative force between two sides, where only one side wins and animosity reigns between them. Rather — and this is what we try to create at The T — competition can coexist with collaboration, with mutual respect, with mutual growth.

Indeed it is possible that competition can further these ideals. In the experience of our program, to give just one example, I have seen Rohan and JP mutually compete with one another over three years in such way that both have benefited. They have made practices more engaging, spurred each other on by example, sparred in match play, laughed in down times and celebrated each others’ successes. And at their highest point this past month, they played a stirring match in the finals of the Mid West Regional Championships that left all observers in awe of their budding talent (won by Rohan 15-13 in the fifth). Two talents striving together — each one the better for having the other to compete with. That is the nature of competition as we see it. 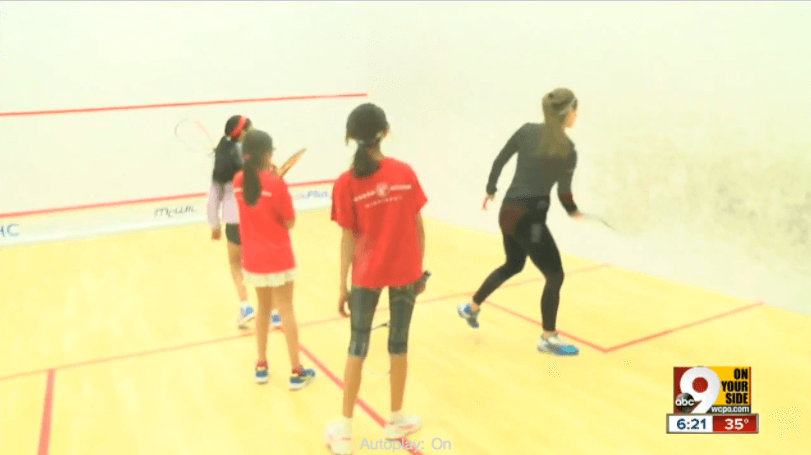 We enjoyed some great press on WCPO Channel 9 News. Sports Reporter Ken Broo spent time talking to our T athletes and learned all about squash and what makes The T Squash Academy one of the best sports programs in the region. Click here to see the news report.