It’s not every day you can watch professional squash live in Cincinnati! This Saturday the pro squash action at the exhibition match between The T’s own Andrew Kriete and Nick Sachvie. Read about the players below. 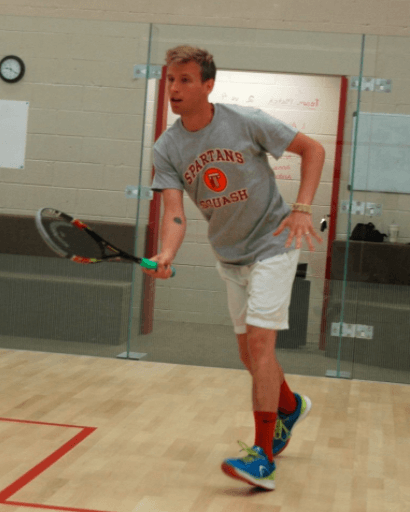 Andrew Kriete played varsity squash for 4 years at Amherst, ending his career in the #1 position and voted the team’s Most Valuable player. He subsequently played 2 years on the satellite tour and keeps his game sharp by playing in regional pro events. Andrew will need all the hometown support he can muster as he goes up against Sachvie, the Canadian speedster and shotmaker. Andrew is also our newest coach at The T.

Nick Sachvie is a 23 year old professional squash player. When he was 18 he won the prestigious US Junior Open, an international junior squash tournament featuring the world’s best junior players. When he was a freshman at Cornell, he reached the finals of the Intercollegiate Championships, squaring off against all the best players in US collegiate squash. He has coached and trained under Jonathan Power, former world #1, and is now competing full time on the PSA tour.