Looking for a sport that focuses on both the mind and the body? Squash has been called “the game of physical chess” because it’s often the game between your own two ears that is played out on the court. Since squash is played on an enclosed court with only 2 players (there is doubles squash, but this is less commonly played as it requires a specialized court), there is an immense amount of mental stamina as well as aerobic and technical skill at play. Can you out-wit your opponent by a surprise lob to the back corner? Can you boast (control the hit to ricochet the ball off three walls before bouncing) and send your opponent running in the wrong direction? Can you maintain your concentration even if you’ve lost the first two games in a match?

This is a challenge, but one we love to accept at The T Squash Academy. Our professional squash coaches not only 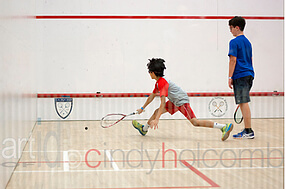 teach the technical aspect of the forehand and backhand swing, but tactical advice to gain control of both the game and your mental acumen. This isn’t just a game for adults! Our junior players are discovering that they indeed have the mental “grit” to stay in the game, play each ball as if it’s their first, not lose hope but to claw back from a tight game lost. It sets these juniors on a path of success in future endeavors, as they know how they can rally after tough set-backs.

If you would like to sharpen your mind, as well as get incredible exercise (Forbes called squash the most athletic sport of all) then you might want to try some of the squash programs offered at The T. We teach juniors and adults and encourage any level of experience, starting with beginners. Click this link to find out when the next “Zero to Squash” session starts or this link to jump into any of the junior squash camps going on this summer. You’ll be glad you did!

Guess who is pitching with the Reds?
Scroll to top