The T Squash Academy has been featured in a variety of news publications. Learn more about The T Squash Academy, located in Cincinnati, OH, by visiting the various links below. Those interested in learning more about squash and it’s impact around the globe can find interesting links to articles, as well.

If you’re looking to pick up a new sport or just looking for a fun way to stay active, you may want to consider learning more about squash.

Squash is a fast-paced and strategic racket sport played by two players in a four-walled court with a small rubber ball.

T Squash Academy provides extensive junior and adult programming, ages ranging from 5-70, for everyone that wants to learn the basics of the sport or improve their skills. Off the court, coaches instill three core values: kindness, respect, and grit.

A Squash Mystery in Egypt: Is There Something in the Nile?

It is one of the most compelling mysteries in sports.

Twenty years ago, Egypt could point to a handful or two of great squash players in its history, and the last time it had produced a worldbeater was in the mid-60s, when A.A. AbouTaleb won the British Open three years in a row.

Today, if victory were cake, these people would be gluttons. The top four men in the world rankings are Egyptian, and six more are in the top 20. Since 2003, an Egyptian has won the men’s world championship 10 times.

Imagine a sport that is responsible for just as many breakups as it is for business deals. Think about a game that burns more calories in an hour than going for a run. Envision a game that is accessible to anyone who has a court near them. What game could be this perfect? Squash!

For anyone who has never played the game, Squash may look like one of the strangest sports ever invented. For those of us who play and love the game, we know how addicting the game is. This article will tell you everything you want to know about squash as well as a few things you didn’t even know you wanted to know.

Squash Is Considered the World’s Best Sport—Here’s Why

Raise your hand if you thought squash was just a vegetable that you ate during Thanksgiving. Yeah, same. But squash is actually one of the toughest sports out there. To be a successful squash player, you need to be in crazy good shape and dedicated to enhancing all of your fitness skills-both on and off the court.

Don’t believe it? Back in 2003, Forbes ranked squash as the number-one healthiest sport after taking calorie burn, cardio endurance, muscular strength, muscular endurance, flexibility, and injury risk into consideration. The Professional Squash Association (PSA) also dubs it one of the toughest racquet sports. And if you’re still not convinced, just watch Amanda Sobhy, the highest-ranked American squash player ever (female or male) get after it.

When you carry a squash racquet in New York City, people admire you. They point you out on the subway and crouch beside their children to whisper, “He plays tennis!”

The game has a recognition problem, apparently. To be fair, though, it also has an image problem. Squash has long been synonymous with prep school, with being weedy and twee, and the most heinous clubs maintain an all-whites rule that encompasses the skin tone of their members. Full disclosure: I went to prep school, and grew up in the Caucasian Chalk Circle.

Yet squash isn’t just for douche bags. More than twenty million people worldwide play it, and Forbes has rated it the healthiest sport. You greyhound around a four-walled court to retrieve a ball caroming at a hundred miles an hour and send your opponent on the longest possible journey in return, then lunge into the far corner, where he’s sent your shot, and so on—and on, and on, and on, for an hour or more. It looks like tennis at triple speed, and feels like heroin without the needles and the nodding off and the vomiting afterward, except when you vomit afterward. The game, above a certain level of skill, is played at a lunatic extremity of effort. 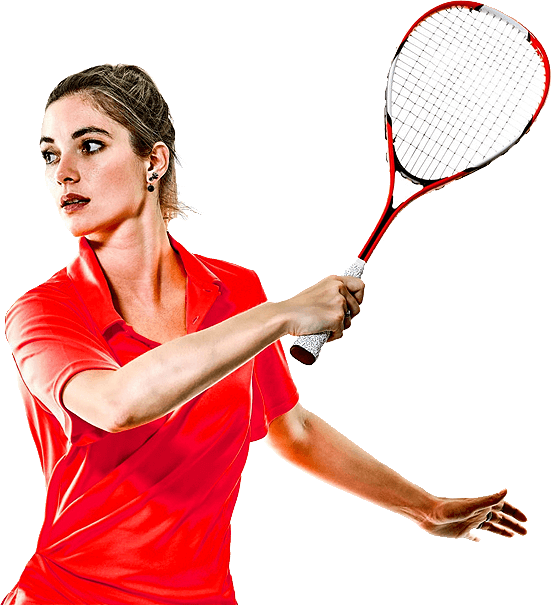