Here is the detailed report Coach Jon wrote up on the Cleveland Rock & Roll Tournament that occurred September 23-25th, 2016. There were Overall it was a fantastic weekend with all of the kids demonstrating fantastic behavior through out the weekend and a great bonus that we had a number of trophies coming back with us!

FRIDAY
Friday evening saw 8 of Spartans take to the courts with Natalie and Nora playing each other in the GU15. Both girls looked slightly nervous which saw a few early errors from them both until the end of the games where Natalie seemed to find the corners squeezing a very close 3-0 win.

In the GU13 both Aanya and Aditi kick started their tournament with convincing 3-0 victories. Aanya showing great shot selection and controlling many of the rallies.

Unfortunately in the BU15 Declan came up against a very strong Henry Frawley who was seeded 3 for the tournament. With the later prevailing 3-0. Rishi also was faced with a tough match against Atreyus – who we look forward to seeing some more at the T – A few nerves early on led to some unforced errors from Rishi, however he fought hard in the 2nd and 3rd game and started to consistently find a better length which led to more competitive rallies. Atreyus however matched Rishi’s rise in level and closed out the match 3-0.

The last match of the evening saw Nikhil lose out in a very close 3 games. With the whole Spartan team cheering him on Nikhil fought hard in the 2nd and 3rd game losing them 13-11, 11-9. A great demonstration of grit and determination, however just couldn’t sneak over the line! 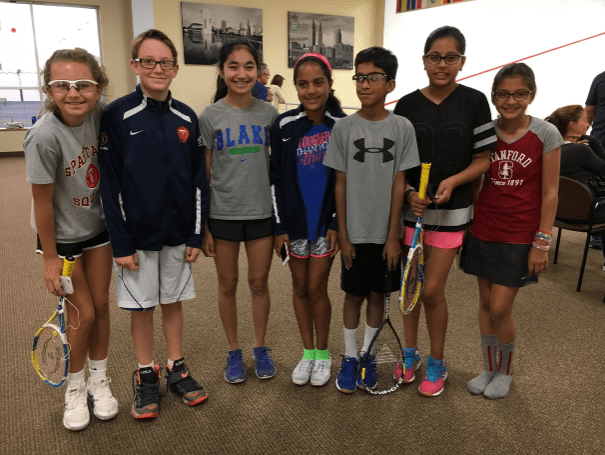 SATURDAY
With an early start Saturday morning (8am) Leo was in a rush to get back to bed comfortably beating his opponent 3-0 and securing The Spartan teams first semi finalist! He showed great court awareness and shot selection to ensure he was never really challenged!

The success continued as Lenna started her weekend with a comfortable 3-0 win which set up another all Spartan clash with Aditi for the top spot in the pool. Both girls seemed nervous from the start with both making unforced errors with Aditi managing to close out the first game. The second game saw both girls come out with more confidence and precision which led to some fantastic rallies and a highly entertaining game. Again Aditi managed to squeeze out the game 11-9 and continued her form taking the third game aswell. This meant Aditi was guranteed a top 3 finish as she topped the pool while Lenna would be fighting for 4th place.

Oliver ensured our second semi finalist with a 3-1 victory over Nikhil’s nemesis from Fridaynight. With the game score at 1-1 Oliver started to play simpler squash looking to hit the back corners before using the front of the court rather than a more open style which seemed to suit his opponent.

Aanvi demonstrated great shot selection and use of power to ease through her first 3 matches in the GU11 not dropping a single game. She then came up against a very competent Dixon Hill who had also dispatched all of her opponents. Aanvi who appeared slightly intimidated by her opponent actually near enough matched Dixon for the first two games losing out 11/8,11/7 with a few errors and misplaced shots being the difference. The third game however was a little more comfortable for Dixon after gaining an early lead which she saw through to the end! Overall a great weekend for Aanvi finishing 2nd and collecting the Spartans first record trophy!!!

Aanya guaranteed herself a top 3 finish after winning her remaining pool match 3-1. Carrying on from Friday night Aanya consistently moved her opponent around the court placing the ball into the corners that her opponent wasn’t covering.

To the boys and their semi finals. Leo got off to a great start finding himself 2-0 up after numerous errors from his opponent and some clinical shot making. Unfortunately his opponent seemed to find a second wind and took the 3rd game 12-10 and carried his momentum into the next two games taking the match 3/2. Oliver, unfortunately also missed out on a final spot going out to the number 2 seed in straight games.

Once again Nikhil narrowly missed out on the victory he was looking for going down to Will Griffin from the CCC 3-1 (11/9 10/12 12/10 13/11) in the consolation plate. This was one of the closest matches of the weekend and a real see saw battle! Nikhil however not deterred by his two narrow loses produced two great wins to finish his tournament on a high.

Onto the GU13 play offs. With Aditi and Aanya guranteed a top 3 finish any nerves earlier in the tournament had now vanished. With each other standing in the way of the top prize the girls knew it was going to be a battle! Aditi managed to continue her great form using her speed and short game to overcome Aanya who fought hard to try and move Aditi around the court.

With all of this on the line Aditi lined up against Mehak with the whole Spartan team behind her!! Mehak took the first two games 11/9, 11/9 with very little to separate the two. Aditi fought back taking the third convincingly 11/6 finding a weakness in Mehak back hand back corner. With Aditi carrying the momentum we were all treated to a fantastic 4th game. Each rally was hard fought with some fantastic shot making and retrieval from both players. Mehak managed to find herself 10/9 match ball. Not deterred by this Aditi dug in and produced a brilliant back hand kill to tie it up at 10/10. Edge of your seat squash then perused from there with no one knowing which way the game would go. Aditi saved multiple match balls and found herself with a game ball of her own. With neither girls managing to convert there chances and the nerves amoungst not only the players but the crowd Mahek found herself with another match ball at 15/14. After a nail biting rally Aditi unfortunately found the top of the tin much to the relief of Mahek.

Knowing she had to beat Mahek to have a chance with claiming the title Aanya started the opening exchanges strongly. However filled with confidence from her earlier victory and knowing a victory would give her the title Mahek rallied on to win 3-0. 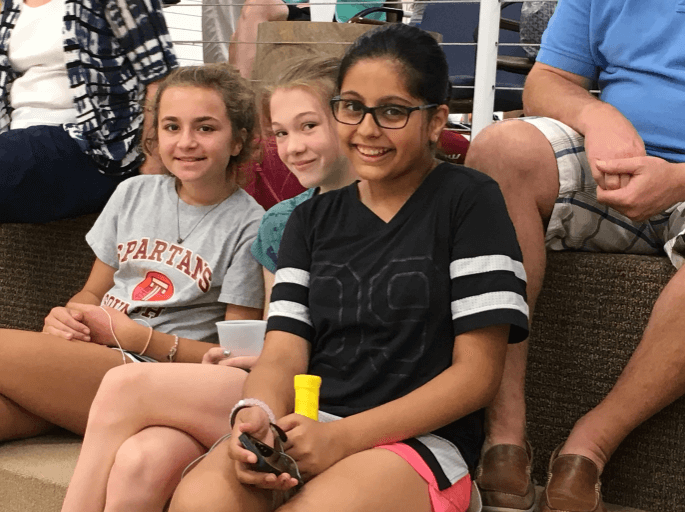 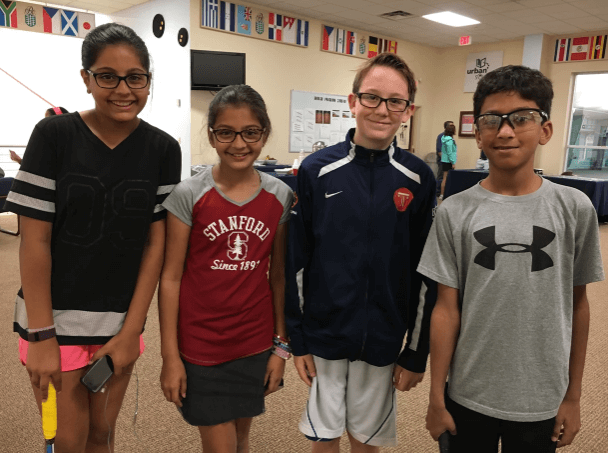 SUNDAY
So with just Lenna to finish her play off matches in the GU13 the Spartans had already claimed 2nd and 3rd. Standing in Lenna’s way of 4th place was CCC member Happy Quinn. After dropping the first game 11/8 Lenna managed to recompose herself and settle her nerves to win the next 3 games and match 3/1. Lenna continued her form into her final match again winning 3/1 and securing 4th spot. It was great to see her using both the front and back of the court with a variety of pace to break her opponents down.

After finishing 2nd in her pool Natalie was playing off for 3rd place. After a close first game and crucially holding her nerves in the second to win a tie break 12-10. Natalie closed out the match in a comfortable fashion to take the 3rd 11/5 using great athleticism and strong drives to the back corners. Another record trophy for the Spartans and a solid weekend from Natalie!

Leo made sure he added to the record collection with a comfortable 3/0 in the 3/4 play off using his short game to pick off his opponent.

After seeing his sister take 3rd, Oliver was hoping he too could match this! Unfortunately Oliver’s opponent started strongly managing to close out a close first game 11/7. After realizing he may need to simplify things and force his opponent into the back corners more Oliver replied storming to take the 2nd game 11/5. The third was then close all the way to 10-10 with a few unforced errors being the difference between the two with his opponent squeezing it 12-10. Knowing he had to win the next to stay in the match it looked like Oliver was trying abit too hard with a number of unforced errors allowing his opponent to race to a 8/3 lead. However, with his back to the wall Oliver fought hard and put a run of 8 points together to take the game 11/8! Another great example of the grit shown by our Spartans over the weekend. Into the fifth and after a few tough opening exchanges the mental strength from the previous game seeming to take its toll on Oliver with his opponent closing the game out 11/5 and the match 3/2.

Alejandro faced the home favourite and 2 seed Jacob Good in the BU17 1/4 final. In the first game Jacob was able to capitalize on some loose balls from Alejandro to race to a big lead which he saw through to the end of the game 11/3. After some refocusing and realizing more patience was needed, Alejandro put all his effort into the second game, extending all of the rallies and looking to break his opponent down. Unfortunately Jacob took the game 14-12 and continued his form into the 3rd taking it 11/4. 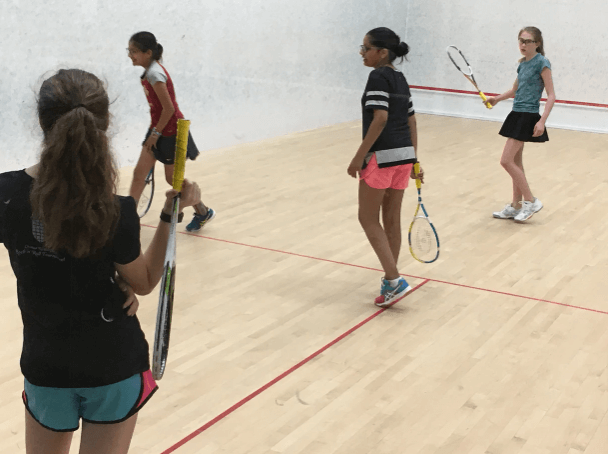 Zero To Squash is making news!

Junior League is getting a little spooky…
Scroll to top