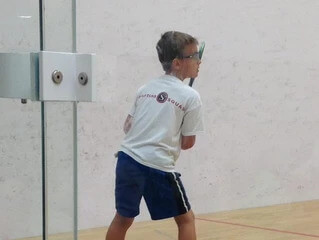 Why bring an 8 year old to an out of state squash tournament where he will be trounced? It’s a reasonable question to ask.

First of all, whenever we have done this sort of thing, it’s always first at the child’s request. They have to know what they are getting themselves into. Next Coach Laura and I consider whether the child wants it badly enough and whether they are ready for challenge. We know a child will take some serious lumps at their first difficult tournament. Will these lumps make him hungrier, will they motivate him to improve or will they break his spirit? We test these questions in advance by increasing the difficulty of a child’s practice schedule in the weeks leading up to the tournament. If a child meets this challenge head on, working harder on their game than they have ever worked and doing it with a determined smile, then on this basis—on the basis of their work—we may give him the thumbs up to head out to a tough tournament.

But there is a second reason. Something that goes to the why of competition. Why does competition matter? What good can it produce? How can it help in our mission of building skills and character?

I like what Timothy Gallwey, a former competitor and coach, has to say on this point. Gallway likens the ennobling element of competition to the role a great wave plays for a surfer. What skilled surfer is content to ride timid waves? Does not the avid surfer scour the beach and, in some cases, out of state beaches in search of a great waves against which to test his skills? The passionate surfer wants to test the limits of his skill, to harness and contain the swiftest breaker. The great wave serves as a test and measure of what resides in himself–in his own will, his own courage, his own resourcefulness and ability to adapt. In this sense, the great wave is at the service of the skill development of the surfer. Deeper than that, the great wave helps the surfer be himself in a fuller sense than he could ever be without that wave.

It is similar with competition. Finding a great competitor is a way of finding out and actualizing one’s own highest capacities. A great competitor, even in a losing match, serves the development of the earnest athlete. It is against the stiffest competition that we can take our fullest measure, that we know what we are made of and what we can be. So the T Spartan–and their coaches–look for tough competition, just as the earnest surfer looks for a great wave.

As for our 8 year old competitor we mentioned earlier . . . the out of state waves he sought in September broke hard against his board and tossed him right off, three straight times. But each time, he got right back on, peddled back into the surf and faced his next opponent with a seriousness of purpose and commitment that was new for him. In the process, he revealed something to us–and to himself–that we had never quite seen from him before. It was a victory, even in defeat; and it was beautiful, like the whitewater after a wave has broken.

Why play in a junior squash tournament?
Scroll to top